Rudraprayag is a town and a municipality in Rudraprayag district in the Indian state of Uttarakhand.Rudraprayag is most loved stopover of the explorers and travellers making trip to Kedarnath and Badrinath. It is a religiously huge goal as it is trusted that the Narad was lifted up by the Lord Shiva in the Rudra Avatar. Further, it is likewise the union of Alaknanda and Mandakini waterways and henceforth a main convergence in the Panch Prayag or Five Confluences. The beautiful view around gives it a paradise like environment with the stupendous Himalayas, the surging heavenly streams and lavish greenery all around to give you a chance to consider over the joyful landscape and forget yourself in the midst of it.Locate the best tourist sightseeing places to see in Rudraprayag,with main 7 remarkable Rudraprayag attractions as below:

Tourism Award Winner Allseasonsz.com is the most trusted brand name of Uttarakhand tourism operating since last 20 years. The travel icon of Uttarakhand-our monumental journey began two decades ago! Over the years, Allseasonsz.com has grown into travel & tourism empire offering multitude of services in Rudraprayag, Uttarakhand.

Places to See in Rudraprayag

Kedarnath is located at a height of 3,581 m above sea level, at the head of Mandakini River. This temple of Kedarnath was constructed in 8th century and is one of the 12 Jyotirlingas and Panch Kedars of Lord Shiva.While seeking repentance after killing the Kauravas, Lord Shiva disguised himself to escape recognition from the Pandavas. When Lord Shiva dived into the ground, a hump was left, which is now worshipped in the temple. It is also believed that the temple has been constructed by the Pandavas. The interiors of the temple are carved withÂ images and the idol of Nandi bull is placed at the entrance of the temple.

Chopta is located at a height of 2,600 m above the sea level and is surrounded with forests. This place is also known as mini Switzerland as it offers views of the Himalayan ranges and also houses diverse flora and fauna. Moreover, number of rhododendron and deodar trees can be seen at the site. Travellers can also visit Tunganath Mandir and Chandrashila Peak as these sites are located in proximity of Chopta. 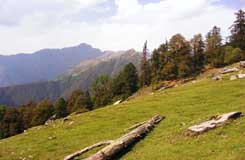 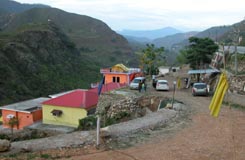 Jakholi is a small village located in the proximity of river Ganges and Mandakini in Rudraprayag district. This village is surrounded by mountains and offers an opportunity to  indulge in trekking. Tourists can visit Chamunda Devi Temple and Rudranath Temple along with nearby places such as Agastmuni and Tilwarathe.

Augustmuni is situated on the banks of Mandakini River in Rudraprayag at a height of 1,000 m. The town is known as the place where Rishi Agastya meditated for several years. Tourists visiting the town can see Agasteshwar Mahadev Temple dedicated to the Rishi. Moreover, tourists also can see the carvings of Gods and Goddesses on the stones as the temple is also known for its architecture. Every year on the celebration of Baisakhi, a large fair is organised and devotees take part in large number to pay devotion to God.. 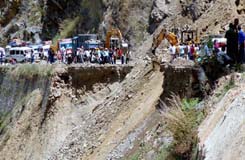 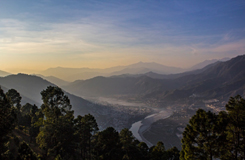 Khirsu is a pollution free region located in Rudraprayag and is surrounded with Himalayas. Situated at an elevation of 1,700 mtourists can also visit Pauri Garhal, Ulkha Giri and Kandoliya. Moreover, Ghandiyal Devta, an ancient temple, is also located in theÂ  proximity of the place..

Kalimath is one of the Siddha Peeths and is famous for the temple dedicated to Goddess Kali. A large number of tourists and devotees visit the temple during Navratri. Moreover, tourists can visit Ukhimath and Guptakashi that are located in proximity of the Kalimath. 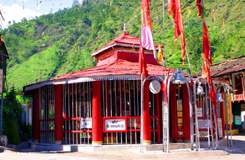 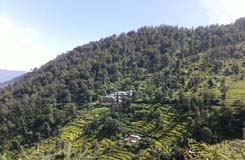 Ukhimath is located in Rudraprayag District, Uttarakhand and is believed to be named after Banasur's daughter Usha. The famous Omkareshwar Temple is located in Ukhimath which is known as the abode of Lord Kedarnath in winters. Moreover, tourists can also see theÂ  crafted idol of Lord Shiva in the temple.

For Kids In Rudraprayag

Places to eat in Rudraprayag