Send us email on

meet us at UTTARAKHAND:
Visit : www.allseasonsz.com 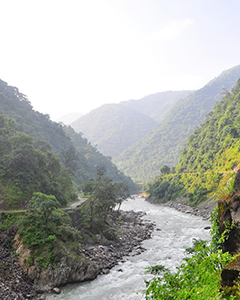 Please be advised Cancellation upon Arrival/ No- show/ Early Departure/ Change of Dates/ Partial Cancellation i.e. Reduction of accommodation booked will be treated as Cancellation. Advance once paid shall not be refunded

Dhanaulti - A perfect holiday destination with a new Eco Park which you will surely enjoy. It’s an actual hill forest village environment with Himalayan breeze and is a delightful place to spend a day. Lal Tibba – It is the highest point of Mussoorie. Magnificent view of snow covered Gangotri, Kedarnath, Chaukhamba, Nanda Devi and Sri Kanta peaks.

Gun Hill - This spot as it may be called a table top may be reached through a Ropeway ride or a 20-minute trudge up a bridle path. Camel's back road - This is a 3 km stretch, enjoyable for walking and horse ridding. One can get a spectacular view of the sunset in the Himalayas from here. Jawahar Aquarium – A new place of public interest just on the mall has much to offer as its name. The Mall - The mall is the main shopping area in Mussoorie. The mall road connects the two bazaars, the Kulri Bazaar and the Library Bazaar. It is the heart of the town.

Kanatal is a small village located 78 Km ahead of the beautiful city, Dehradun in Uttarakhand. It is named after a lake, Kanatal, which used to be there. The region is surrounded with majestic hills as well as some famous hill stations like Mussoorie, Chamba and many others. Kanatal travel guide includes all the information regarding sightseeing and adventurous activities around this appealing place.

Mussoorie, the notorious Queen of Hill stations, as proclaimed by the British gentry who avoided hot, aimless summers of Delhi and Kolkata by investing energy here.Being at a normal elevation of 2,000 meters (6,600 ft), Mussoorie, with its green slope and varied vegetation, is a fascinating slope resort. Ordering snow ranges toward the north-east, and sparkling perspectives of the Doon Valley and Shiwalik goes in the south, the town was once said to exhibit a "fairyland" air to visitors. The most noteworthy point is Lal Tibba with a stature of more than 2,290 meters (7,500 ft).Mussoorie, 300 kilometers north of Delhi the capital of India, is among the more well known slope stations of India, and is known as the Queen among the slope stations. It overloos the sprawling Doon valley and the city of Dehradun, the portal to Mussoorie and infact to the whole Garhwal locale of the Himalayas.

company's "above and beyond" customer service

Uttarakhand is amazing state and 2 1/2 weeks wasn't nearly enough time. We planned the trip because our daughter was studying abroad for the semester. Our travel planner tailored the trip to our specifications, quickly making any and all necessary changes. Traveling from the Garhwal to Kumaon, the itinerary was thorough and included maps, directions as well as additional activities to do in each location. We arrived on the Dehradun airport, just after a heavy rain storm that closed the roads to Mussoorie. This was to be our first excursion and we were a bit disappointed. We contacted our travel planner and her team in Uttarakhand who were diligent in trying to rebook a modified version of the tour. Due to weather it did not happen, but the customer service exceeded our expectations. The rest of our time went as planned with awe inspiring scenery from waterfalls, forest & himalayan views sites and relaxing daytrips to surrounding areas of Kanatal, Dhanaulti & Tehri. The real testimony of our travel company's "above and beyond" customer service.We can't thank her enough for handling this stressful situations during the tour.

Thank you very much for your review Rasila & Avtar.We appreciate your candid feedback to help us to build on areas where we are doing well and work on those which need to be improved.Thank you again and we hope you are traveling again soon with us with enhanced services.

All were top notch and wonderful experiences

Despite having to return 3 days early, I would say this was one of the best trips we've ever taken. Our travel planner set up a trip to remember with off the beaten track adventures and once of a lifetime things to do. He was also fantastic and a lifesaver with regard to the COVID-19 issues. He went above and beyond to take care of our revised travel plans and refunds and is still taking care of us. We would definitely use All Seasonsz and our travel planner again! The adventures that our travel planner set up. Car hire, auli tour, restaurants recommendations and hotels. All were top notch and wonderful experiences.

Thank you very much for your review Swojanya.We appreciate your candid feedback to help us to build on areas where we are doing well and work on those which need to be improved.Thank you again and we hope you are traveling again soon with us with enhanced services.

Wow ! Simply the best trip of our lifetime.We think we are fortunate to choose this travel agency as a potential agent to be a partner in planning our trip. The agency planned a two week trip and even when the weather and the covid virus hit. She never lost sight of our trip and how to ensure we had the information to make the decision right for us. We choose to have the agenda adjusted to avoid areas of our concern. The new agenda provided us a more unique experience than we anticipated. Especially thanks to "Jyoti" the travel planner from All seasonsz and the travel team.

Thank you very much for your review Parvathy & Satish Reddy.We appreciate your candid feedback to help us to build on areas where we are doing well and work on those which need to be improved.Thank you again and we hope you are traveling again soon with us with enhanced services.

We had a five star holiday!

We had worked with this travel agent before and had found her to be professional, helpful, and wonderful to work with. Accordingly, we chose to work with her again this year as we began planning our annual diving holiday. Again, this travel agent distinguished herself as the consummate professional, and more than that, a person with a huge amount of patience and empathy.We were relieved that our agent still had enthusiasm for our trip, and came up with several suggestions.All of the special requests and arrangements must have been a headache for our agent, but it all worked out. We had a five star holiday!

Thank you very much for your review Kumar Ravel.We appreciate your candid feedback to help us to build on areas where we are doing well and work on those which need to be improved.Thank you again and we hope you are traveling again soon with us with enhanced services.

One of our favorite vacations

We had a large group, 24 people from small children, teens and adults traveling to Uttarakhand from Kolkata. I contacted this Uttarakhand travel agent and from the first the contact person-Mayank was very patient, very prompt, responded to all my emails and all my questions. He and his team arranged a wonderful vacation for us. We had a private bus, always prompt, always clean. Our hotels were perfect, clean, modern amenities. The rooms were always ready for us and everything was consistently smooth. It was a well organized, wonderful and memorable tour of Uttarakhand. We got to see and do so much and this agent had arranged it all! From rafting to bungee jumping, to cable car ride in Auli we did it all! One of our favorite vacations!!

Thank you very much for your review Rahul. We are working very hard to deliver the best possible user experience and the absolute best supply of great multiday tours all around the Uttarakhand & Himachal. Thus, highly appreciate your feedback.