In culture of Kangra comes the reflection of religious,god fearing Kumaoni people with simple lifestyle living away from the hustle and bustle of metro cities. This is fundamentally because of the way that they have dependably separated themselves from th`e of shopping mall, multiplex cultures. Due to boost in Kangra Tourism since last 10 years the attitude of local people has no-nonsense,friendly towards the tourists.

Those fairs which take place during Chaitra and Baisakh (second half of April and first half of May) are called Birshu.A day before this month begins, the delicacies are cooked in all the households and are sent to the relatives. On the next day, the village temples are decorated. Everyone assembles in front of the temple where the gur (spokesman of God) performs Deo Khel (special dance performed by the gur) and goes into the trance. In the state of trance he makes the yearly predictions and assures the people of his help in the time of need.Then the village God or Goddess is taken round and all the people greet them in front of their houses and seek their blessings. After moving throughout the village, the God or Goddess is brought back to the temple and a fair is held.

Folk Dances-Kuluvi folk dances reflect rich cultural heritage, vibrant life style, love, hard work and the struggle of local people to survive in the adversaries. Kangra People are very fond of dances. They are prompt to dance on occasions like, fairs and festivals . The Folk Dances of Kangra can be broadly grouped as-

Charasay-Tarasay: This dance is also called Birshu-Nirshu. It is performed in the months of March and April. Only married women can take part in it. Any number of dancers can participate. This dance is performed only on the songs and the musical instruments are not played. It starts in the evening and ends in the morning.

Women folk danceLalharhi: Only unmarried women perform this dance during fairs and marriage ceremonies. The dance is accompanied only by songs. The musical instruments aren't played during the dance. The dancers arrange themselves in two rows facing each other. One of the rows starts singing, dancing and moves towards the other row. Then they come back to their previous positions. The other row of dancers follow the same step.

Kahika Dance: Kahika dance is performed on the occasion of Kahika fair. A man is made unconscious for one or two hours by the divine power. He is called 'Naurh'. The wife of Naurh, called Naurhan performs this dance. She dances around the temple in front of the palanquin of the local deity. Her dance expresses that she has offered her husband to the deity and if he does not return back to consciousness, she will take away all the belongings of the deity.

Bandhu or Ghost Dance: This dance takes place in January from 4: 00 A.M. to 6: 00 A.M. Because of indecent songs and indecent behavior, which are an essential part of the dance, women are forbidden to see it. The dancers get together in the temple premises with torches in their hands. After dancing there for some time they move to a particular place. They dance at that place and move back to the temple. They light a campfire called 'Jagra' before the temple. It is believed that after performing the Bandhu dance the entire evil spirits ward off and the people of the village live in peace and harmony.

Horn Dance: It is a traditional dance of Kangra people, which is performed, in the cold and dark nights of January. The story behind it is that the people performed this dance to get rid of an evil king. He was so enchanted by the dance that he did not realize that the dancers had cut his throat. There are six dancers in the horn dance. Two of them disguise themselves as a deer by covering themselves with a shawl and placing horns on the head of the person who is in front. Two other dancers are dressed up as clowns. Out of the rest one is dressed up as a woman. They perform the dance in the temple and then go door to door performing their act.

Deo Khel & Hulki Dance: Deo Khel is a religious dance. The person who is dancing is believed that he goes into trance (that God has entered his body). This person is called Gur. When he starts dancing a procession is taken out which is led by the Gur. The local people dance and follow the palanquin of the deity. Hulki Dance is similar to Deo Khel.

Natti: Natti is the most popular form of mixed dance. On special occasions the dancers dress up in their traditional costumes. Generally there are twelve to sixteen dancers but any number of dancers can take part as the dance progresses. Usually they dance in a circle.

The fairs of the valley portray rich cultural heritage of the valley. These fairs carry enormous religious worth and preserve a rich heritage native's belief in divine powers.

During these fairs, the spirit of Kangra is visible on the faces of gay people. These simple rural folks take delight in songs, dances, laughter and celebration. The people are in a happy and festive mood. They visit their relatives to greet them. On the day of fair the guests are heartily welcomed and the hosts feel great honour in serving them with food and drinks. For local people, it is time to relax and enjoy with their friends and relatives.

Phalgun month (mid-February and mid-March) marks the beginning of fairs and festivals in the valley. Fair of Phagli is held between mid-February to mid- March. The fair depicts victory of sages Manu and Shandalya over demon Tundi Raksh. From this day onwards, there are various fairs taking place at almost every village.

Nowadays, these fairs also have economic importance besides religious significance. During these fairs, people buy and sell various articles of basic necessity. Even as the years have passed, people still celebrate these fairs with full enthusiasm and exuberance as it used to be in the good old days.

Basant Panchmi is celebrated with great vehemence in various temples of Kangra. At Naggar, it is celebrated in Krishna Temple which is at a distance of 1km from Naggar Castle .

Celebrated with great zeal, the Nanda Devi mela is organised in September in most parts of the Kumaon region, Kangra being one of them. Apart from the song and dance, huge markets as well as some rides are put up near the Nanda Devi Temple.

Pattoo- It is a traditional dress of the local women. It is thicker and heavier than shawls, with fast and bright colors. Women wear pattoo over their clothes and pin both ends with local silver broaches called 'boomini', which is a long silver chain. It covers the whole body and a piece of cloth is tied around the waist called gachchi, which acts as a belt.. Dhatu or Thipu - Dhatu or Thipu is a square piece of cloth used to cover the head.. Shawls - These shawls are world famous because of their beautiful intricate designs and bright colors.. Pullas - Pullas are footwear like the bedroom slippers made out of hemp (fibre extracted from Marijuana stem). Very colorful designs are made on the upper portion with colored wollen threads.

Climate of a place influences the native's style of living, their food and their attire. Due to the chill weather almost for the complete year, warm clothes are used more in Kangra Valley.The clothes of the people have changed with time. Presently people of Kangra wear dress common in any part of the country but

Kuluvi folk dances reflect rich cultural heritage, vibrant life style, love, hard work and the struggle of local people to survive in the adversaries. Kangra People are very fond of dances. They are prompt to dance on occasions like, fairs and festivals

For Kids In Kangra 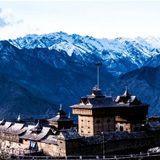 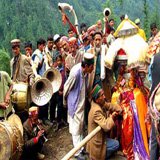 Places to Eat in Kangra 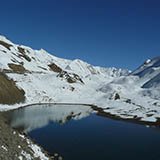 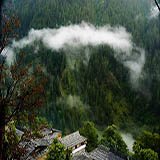