With a very strong appeal of the British era which is still resplendent in the walls, roof, balcony hotel has undergone many stages of renovation. The wooden floors, the design of .....

Hotel Himalaya, a pre-Independence property, was once used by Indian kings and princes. This legendary abode boasts of 60 rooms with most offering................

One day would not do justice to the slope town but if one is concerned to accomplish it, I would prescribe covering the following:


Just Viewed by other Allseasons Travelers

Places to Visit in Nainital

Sah Group Hotels, an idol of Nainital has a past of vast audience, superb homely amenity and service. Founded by the fabled lady of Nainital, Late Smt. Savitri Devi Sah and put up in the year 1958, has seen Nainital grow into a commercial tourist destination. It has seen the people who visited not for weekend but for whole season and returning with relation that lasted for life.
Nainital is the ideal place to leave the whole world behind and go for long nature walk, boating in lake, visiting zoo and stroll on the Mall. In Naini Lake one can enjoy boating on its clear green water on traditional boats, paddle boats and beautiful yatches. One can also enjoy shopping on Mall Road and buy good exclusive to Nainital.
Allseasonsz welcomes you to Sah Group Hotels where you are ensured of the finest holiday moments!
On your next vacation when you visit Nainital book a Sah Group Hotel @ Allseasonsz. We offer great deals, packages with tariff, and discounted price Hotels and Resorts. View photos, read reviews and get recommendation. 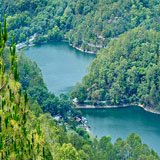 2Where You Want To Go?

Nainital offer unending choices for all age groups.Some of the best Nainital tourist attractions are
Naini Lakeis soul of the town sprinkling its charm with natural and idle water. Nainital is split into two parts by Naini Lake named Mallital and Tallital. Mallital is northern shore of lake and tallital is southern shore of the lake. Both shore of the Naini Lake are ideal place for shopping where one can buy goods exclusively sold with “Made in Nainital” tag.
Pt. Govind Ballabh Pant High Altitude Zoo is situated at a distance of 2km from the Nainital Roadways bus station. The zoo is places at an altitude of 2100mts above sea level bringing high altitude species a sufficient and habitat like surrounding. The Zoo consists of species of animal like Siberian Tiger, Himalayan Black Bear, barking deer etc with many species of plants and birds. The zoo is closed on Mondays.
Naina Devi Templeis the temple devoted to Maa Naina Devi represented by two eyes. The temple was devastated by the forceful landslide of 1880, and was later fixed because the temple was of great devotion between locals. The temple is situated on the northern shore of Lake.
Snow View Pointis a popular viewpoint at an elevation of 2270 meters. Naina Peak is the maximal peak adjoining the lake. A beloved tourist spot, the top offers a charming wide view of the resort and a gorgeous view of the Himalayas including Nanda Devi and the mountains on Tibetan Border.
Governor Housewas completed in 1899 and created in the Victorian Gothic private approach by the architect F.W. Stevens as the summer palace of the governor of North West Province. Presently, Raj Bahwan is an official stay for the Governor of Uttrakhand State. It is two storied with 113 rooms, a swimming pool, a golf court and a large garden.
Sariyatalis at a distance of 5 kms from Nainital on the way to Kaladhungi, bundled this cramped Lake and an alluring traveler spot. Sariyatal is an awesome to spend some time in the silence enjoying the charm of nature.
Nainital Sah Group Hotels, Sah Group Hotels in Nainital, cheap Sah Group Hotels in Nainital, budget Sah Group Hotels in Nainital, Sah Group hotels nainital 5 star hotels, Sah Group Hotels nainital 4 star hotels, Sah Group Hotels nainital 3 star hotels, Sah Group Hotels nainital 2 star hotels, accommodation, stay, rooms,book Sah Group Hotels in Nainital, Sah Group Hotels ,list of Sah Group hotels,best Sah Group hotels,budget Sah Group Hotels,hotel mount n mist nainital,hotels in nainital,Sah Group resorts nainital @allseasonsz.com-Book online Hotels in Nainital, grab privileged discounts on Nainital hotel room rates,packages of 2,3,4,5 star hotels at best rates?Your search ends at www.allseasonsz.com-Uttarakhand largest online travel company since last two decades.